In the house of Helios, god of the sun and mightiest of the Titans, a daughter is born. But Circe has neither the look nor the voice of divinity, and is scorned and rejected by her kin. Increasingly isolated, she turns to mortals for companionship, leading her to discover a power forbidden to the gods: witchcraft.

When love drives Circe to cast a dark spell, wrathful Zeus banishes her to the remote island of Aiaia. There she learns to harness her occult craft, drawing strength from nature. But she will not always be alone; many are destined to pass through Circe’s place of exile, entwining their fates with hers. The messenger god, Hermes. The craftsman, Daedalus. A ship bearing a golden fleece. And wily Odysseus, on his epic voyage home.

There is danger for a solitary woman in this world, and Circe’s independence draws the wrath of men and gods alike. To protect what she holds dear, Circe must decide whether she belongs with the deities she is born from, or the mortals she has come to love.

Circe is a daughter of Helios, god of the sun.  However, she is not the daughter Helios imagined, seemingly bereft of power, with a voice that offends her family and the other gods.  When she falls for a mortal man, she is desperate to keep him and, in her search for a way, discovers her powers of witchcraft.  She manages to transform her mortal man into a god, but it doesn’t go the way she planned, and he is not in love with her once he sees what is now on offer to him.  In a fit of rage, Circe uses her witchcraft to commit a crime against another nymph and is banished to a deserted island.

While in exile, Circe develops her powers of witchcraft, living among animals and growing her own herbs.  She is visited by gods and mortals, befriending some and making enemies of others.  Due to her immortality, disdain for most of the gods and witchcraft powers, she doesn’t fear much, until she finally finds something she’s willing to do anything to protect.

I feel like this book was a real case of “it’s not you, it’s me”.  It was ok, there were parts I really liked, but there were plenty I just….didn’t.  However, I don’t know if that was because there were really parts to dislike or whether that’s because I should finally just admit to myself that although I like the idea of Greek mythology stories, I actually don’t really like reading about them.  Not in the way this book was written anyway.  I like more modern stories that incorporate the gods into them and become a reimagined tale, but the style of writing that lends itself to straight retellings of mythology….not really my cup of tea.

I found the first two thirds of the book painfully slow.  I almost DNF’d a few times and if it wasn’t for the fact that I almost never DNF, I probably would have.  I’m glad I didn’t, the last third was much more interesting, but still, the style of writing made it tough.  It took me almost a week to read, when a book of this length would usually only last me a day or two.

I did love watching Circe sift through some powerful human type emotions and found the description of the desperate, fierce love she felt for her son to be beautifully written.  The trials of parenthood and the complicated relationship, between mothers’ and their children as they grow up was, for me, the best part of the story.  These parts and the descriptions of the island were what made me bump it up to a three star read.

I felt as though there were just too many characters who were included, but added nothing to the story.  It was almost as though they were written in just to throw a few more well known names into the book.  But, again, I’m beginning to think mythology stories just aren’t really my thing, so for someone who loves it, maybe that won’t be an issue at all.

I really wish I could have read this book through the eyes of a mythology lover because I think it would probably have been quite beautiful.

I can’t finish without mentioning the cover though.  What a stunning piece of art, the dust jacket and under the cover.  Just incredible. 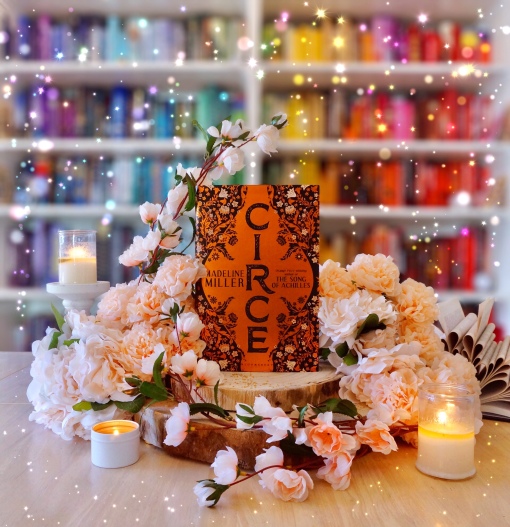 7 thoughts on “Circe by Madeline Miller”