Today is my tour stop on the Slay blog tour, thanks to Ausyabloggers and Hachette Australia!

We are different ages, genders, tribes, tongues, and traditions… But tonight we all SLAY.
By day, seventeen-year-old Kiera Johnson is a college student, and one of the only black kids at Jefferson Academy. By night, she joins hundreds of thousands of black gamers who duel worldwide in the secret online role-playing card game, SLAY.
No one knows Kiera is the game developer – not even her boyfriend, Malcolm. But when a teen in Kansas City is murdered over a dispute in the SLAY world, the media labels it an exclusionist, racist hub for thugs.
With threats coming from both inside and outside the game, Kiera must fight to save the safe space she’s created. But can she protect SLAY without losing herself?

Thank you so much to AusYABloggers and Hachette Australia for providing me with a copy of Slay and having me on tour!

Kiera has a secret.  A secret she can’t tell her family, her closest friends or even her boyfriend.  Although she is a normal school girl by day, she has created and runs a huge online game called Slay.  The game involves battles via different cards that Kiera and her fellow moderator have designed to reflect their black culture.

When news breaks that a teenage player has been killed by another player, Kiera starts to question whether she’s responsible and whether there can be any truth to the media’s perception of the game – that it’s racist based on its exclusion of other races.

Slay was an interesting read that had me, as a white person, thinking about issues I probably wouldn’t ordinarily  put a lot of thought in to.  I thought the culture aspect of the game was super fun and such a unique concept.  I know next nothing about gaming, however, so a lot of the game-speak went over my head. I think for people who love gaming, they would ‘get’ a lot of the things I simply missed due to ignorance.

Slay deals with many different forms of racism, and simply how Kiera feels as a black teenager, going to school with almost exclusively white classmates.  While her mother tries to ensure Kiera and her sister put on a face that will have them blend in at school, Kiera’s boyfriend accuses her of not being ‘black enough’.

The boyfriend, Malcolm, was a piece of work.  Emotionally manipulative and abusive, his hatred of white people extended to inter-racial relationships and anything he considered not black culture.  Kiera, blinded by love, tries to pass it off as him being passionate but a bit confused, much to the distress of her sister, who sees him for who he really is.  Malcolm infuriated me as a reader, mostly for the controlling way he treated Kiera.

This book is one that might divide people’s opinions, but it’s definitely one that will leave you with thoughts by the end.  I’d recommend this one for lovers of The Hate U Give and Warcross!

About The Author
Brittney Morris holds a BA in Economics from Boston University. She spends her spare time reading, playing indie video games, and enjoying the Seattle rain from the comfort of her apartment. She lives with her husband Steven who would rather enjoy the rain from a campsite in the woods because he hasn’t seen enough horror movies. Brittney is was chosen as a Novel-In-A-Day participant 2016, is a four-time NaNoWriMo winner, and an active informal mentor in #PitMad and #DVPit. She is also a 2018 Pitch Wars mentor.
Author Links
Website – https://www.authorbrittneymorris.com/
SLAY Website – https://www.slaythebook.com/
Twitter – https://twitter.com/BrittneyMMorris
Instagram – https://www.instagram.com/brittneymmorris/ 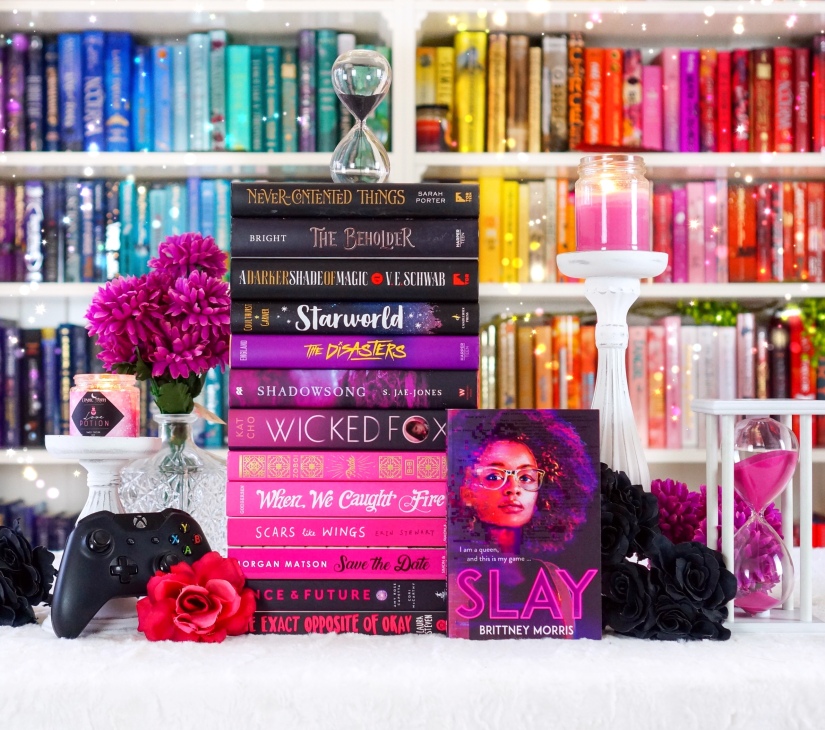