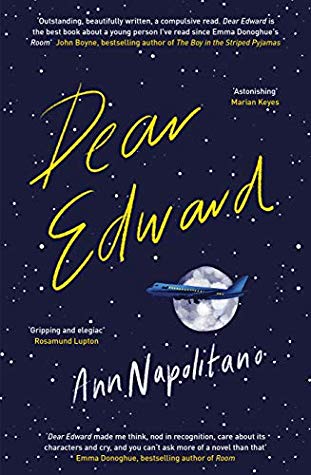 Today is my stop on the bookstagram tour for Dear Edward, thanks to Penguin Books Australia and @readthebooktours !

One summer morning, a flight takes off from New York to Los Angeles. There are 192 passengers aboard: among them a Wall Street millionaire; a young woman taking a pregnancy test in the airplane toilet; a soldier returning from Afghanistan; and two beleaguered parents moving across the country with their adolescent sons. When the plane suddenly crashes in a field in Colorado, the younger of these boys, 12-year-old Edward Adler, is the sole survivor.

Dear Edward recounts the stories of the passengers aboard that flight as it hurtles toward its fateful end, and depicts Edward’s life in the crash’s aftermath as he tries to make sense of the loss of his family, the strangeness of his sudden fame, and the meaning of his survival. As Edward comes of age against the backdrop of sudden tragedy, he must confront one of life’s most profound questions: how do we make the most of the time we are given?

Thank you so much to Penguin Australia and the author for providing me with a copy of Dear Edward!

12 year old Eddie is travelling with his family to their new home in LA.  He is sitting with his father and brother, and wishing his mother would come and join them from first class, where she is sitting to write her screen play without disruptions.  When the plane crashes, 191 people die, and Eddie is the sole survivor.  Whisked off to live with his aunt and uncle, amid a world that has suddenly catapulted him to fame as the ‘miracle boy’, Eddie is sure nothing will ever make sense again.

Dear Edward alternates between the lives the passengers on the doomed flight, and Eddie’s, now known as Edward, struggle to cope with his grief and new normal.  From navigating a new friendship, to attending school for the first time after being homeschooled his whole life, Edward discovers grief has no easy answer.  I really enjoyed the way this book spoke about the physiological aspects of grief – from Edward’s numbness to the world around him, to other’s perception that after a certain amount of time, people will have just moved on with life.  Edward’s story was not about getting over his tremendous loss, it was about eventually learning to live with it, knowing his life would never be the same.  There was a beautiful friendship between Edward and a neighbour girl, Shay, and lots of side issues for other characters in the book, including the other passengers on the plane and his aunt and uncle’s struggles with infertility.

The individual stories from a few of the passengers we got to know were wonderful.  From a grumpy old business man, to a hungry up and coming one, to a lady making an escape from an ex-husband and one running towards what she hopes will be a proposal.   I loved the way this book dove back and forwards between the two timelines.  Even knowing what was going to happen, reading the lead up to, and the actual event of the crash had my heart in my throat.

Dear Edward is a tragically sad book, but the story is so heartfelt that it was an easier read than I had imagined.  The ending had me blinking back tears and the whole book has left a lasting impression on me.

I can’t recommend this one highly enough!