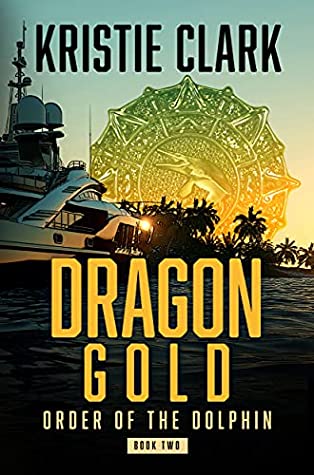 A dragon will kill any who dare to take its gold.

After her dangerous adventures earlier in the year, everything is finally going well for Dr. Eva Paz. Her breakthroughs in dolphin communication are changing the world. Her discoveries could save the reef she loves. And now her mother has found love again.

But then a madman returns to claim what’s his. Eva’s old nemesis, Julian Gulliver, kidnaps Eva’s mother, and he demands an exorbitant ransom.

What she does have are friends who are willing to do anything to help, including ex-Navy SEAL—and ex-boyfriend—Dr. Thomas Sternberg. But Eva’s greatest asset may be her dolphins: Taffy, Finn, Cleo, and Chico.

Together, they need to mount a rescue effort. Yet things are even more desperate than they imagine, for Julian isn’t the only menace terrorizing Roatan.

Join Eva as she works with Thomas and her dolphins to rescue her mother and save the reef from a man who would destroy them all.

Thank you so much to Delphi Imprint for sending me a copy of this book, via NetGalley, in exchange for an honest review!

Eva and Thomas have used the money they acquired from Julian to make improvements to the dolphin facilities and further Thomas’s research into child cancer. They had assumed Julian didn’t know about the money, since they haven’t heard from him, however, when Eva’s mother is kidnapped from a romantic boat ride, Julian demands a ransom they can’t possibly pay. With time running out for Eva’s mother, they need to find a way to rescue her.

I felt like we got even more dolphin time in this book, which was brilliant because I adore them! Cleo was centre stage this time and I absolutely loved her chapters (while still being petrified something would happen to one of the dolphins!). There was decidedly less sea monster time though, which was a bit sad. The junior tylosaurs were mentioned a bunch of times, but their parts seemed quite downplayed in this book. There was also an awful animal cruelty act against a cat, that was brought up again and again. That sort of thing particularly bothers me, so I mention it as a warning to anyone going in who feels the same.

There was a secret that Eva has been holding on to that is revealed in this book, that made me feel quite negatively towards her too. She’s had plenty of time to expose it and just…hasn’t? Why?  I did love the relationship between Mal and Romina though and Julian is a world class bastard 😄